Sadiq Khan became mayor of London in the first place because of identity politics. Khan has turned London into a cesspool of crime, along with heightened jihad activity stemming in large part from mass migration. Recently, he blamed the coronavirus lockdown for his own “improper leadership,” which actually started at the beginning of his tenure as mayor.

Then came the news last week that “two large sculptures celebrating mass migration will be unveiled in London next year.” This follows efforts to erase London’s own history by Black Lives Matter, and Sadiq Khan isn’t finished yet. The disastrous mayor met with police “currently hiring so-called ‘racism spotters’ to examine whether prospective police officers are prejudiced,” just as Khan prepares to slash the budget of actual police. Crime will rise even more while these thought police are making sure no one is “racist.” 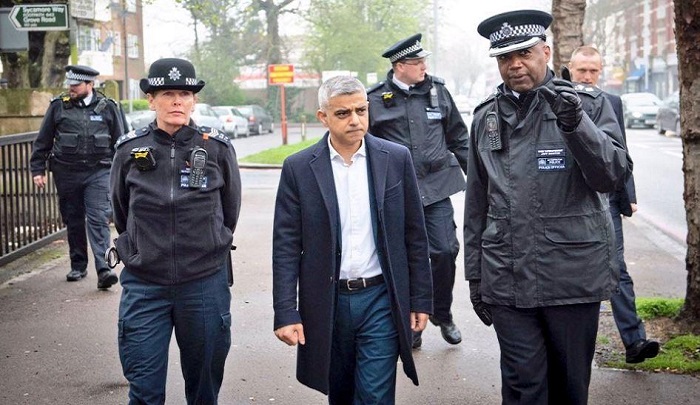 The civilian staffed position has been in place since 2003, yet the salary for racism spotters has recently been given a 50 per cent bump, meaning that they can earn £150 per day, plus expenses. The pay for the position, which is part-time, would be equivalent to a full-time salary of £39,000 — ten thousand more pounds than the starting rate for actual police officers, according to calculations made by British newspaper The Sun.

Recent advertisements from the Cressida Dick-led Metropolitan Police were promoting 50 open racism spotter positions, with those hired to work for at least 25 days per year. Prospective hirees are not required to hold any experience or qualifications in the field to be employed, though it is unclear what would qualify someone to judge if an officer is racist or not.

“The Met obviously shouldn’t be hiring officers who hold overtly racist views. But it is clearly an unreasonable use of public money to pay community assessors such huge sums when the basic salaries for police officers remain so low,” David Spencer of the Centre for Crime Prevention told the newspaper.

The pay increase was also criticised by the research director for TaxPayers’ Alliance, Duncan Simpson, who said: “A 50 per cent, taxpayer-funded pay hike is extraordinary given most people are facing a financial squeeze.

“All areas of the public sector, including the police, need to remember that every penny they spend comes from taxpayers, who are already paying the biggest tax burden for 50 years.”

In response to the revelations, a spokesman for the Met said: “To compare the day rate of casual workers with a salaried police constable, with the pension and allowances that attracts, is overly simplistic.

“Assessors also represent the diverse communities of London. It is in everyone’s best interest that we attract, recruit and retain the very best officers,” the MPS added.

Last week, the mayor of London, Sadiq Khan, announced that he will be looking to cut the budget of the Metropolitan Police, the Mayor’s Office for Policing and Crime (MOPAC), and the fire brigade, among other public services amidst budget shortfalls due to the Chinese coronavirus.