The video below will change your outlook on life forever

The sick and demented individuals involved in child pornography and ritual, satanic abuse of young children are being rounded up one by one across the world. Hollywood celebrities have featured prominently in the crack down along with their colleagues in crime coming from the ranks of politics, media, police, public service and clergy including the Pope.

Tom Hanks’ recent isolation in a Gold Coast hospital after catching corona virus allegedly was caused  by him ingesting virus-infected Adrenochrome, a substance derived from the oxidation of adrenaline found in the human body. It is supposed to be a fountain of youth for users.  Numerous other Hollywood personalities also have caught the virus. The substance is not approved by the Food and Drug Authority for use by humans. This begs the question: What clandestine activities did Hanks get into on the Gold Coast while filming there for four months? Who are the Australian notables involved in these activities? 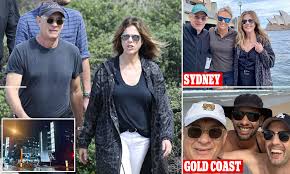 Interestingly Adrenochrome has been commercially available from the city of Wuhan in China for many years. Wuhan of course is from where the Cov19 virus originated after it was stolen from a Canadian laboratory by two Chinese scientists in 2018.

Investigators have alleged Adrenochrome is harvested from some of the 800,000 children who are reported as missing in the United States each year.

This video from our US correspondent Alex Bruce will shake you to your soul. We can only pray Trump is able to clean up the putrid mess. It is notable that Hilary Clinton confidante and former Labor (Democrat) Australian Prime Minister Julia Gillard has a column in News Ltd publications.

Will Gillard and her Australian compatriots go down with the Clintons?

This video is suitable for adults only. You won’t be the same again after viewing it.

Witch hunt: the storm is upon us

I just got off the phone with my friend, who’s a retired Marines Special Forces Lieutenant who was just briefed for over an hour by a 3-Star General. What he was told sounds like reports I’ve been seeing on social media that I’ve discounted. I know the following sounds starry-eyed and trite, even. For his part, he told the General that he’d believe it when he saw it – but here goes:

The coronavirus was a Globalist ploy that failed and has been hijacked by the Trump Administration to be used as cover to keep people inside and to prevent collateral damage during a military op of mass arrests. Some targets are very violent and they will fight back. For your safety, it’s best to stay inside.

The operation is live. Arrests are happening in Southern California now. It’s being overseen by NAVSPEC. They will arrest 160,000 people in 90 days, including members of the mainstream media and Barry Soetoro.

They’re starting now by taking down Antifa, MS-13, the mafia, drug gangs and other mercenaries hired by Soros and used by the Dems/Deep State.

These mercenaries were going to conduct mass riots and mayhem after the election but this is being stopped. There will soon be Martial Law, maybe as soon as this Monday.

Thousands have been arrested in Italy already.

The situation is “fluid” but it’s more or less like this:

You may have noticed that during Trump’s daily coronavirus updates, that starting around the 14th or the 15th, the Presidential Seal was removed from the podium. That seal represents the US Corporation, of which Trump was elected the President and for which he was drafted as a corporate raider to take it over and to restore the Republic. Trump will not be President after January 2021. Or most probably not.

There will be a financial reset – the end of the dollar/petrodollar.

The the assets of criminal banksters, Rothschilds, The Committee, etc. who’ve been stealing from us for decades are being seized. We will be repaid. The IRS and the Fed will be abolished and after all of this shakes out, we will only pay consumption taxes of between 7%-15%.

Everyone will be financially better off when all is said and done.

We will be informed of a lot of things that have been kept secret; medical breakthroughs, suppressed information about alternative energy and the truth about extraterrestrial life.

Everyone will be given a credit card to buy a free energy device and we will never have to pay the electric company again.

I know this all sounds like the NESARA emails I used to get and that it’s even more fantastical than the “hopium” we’ve been hearing from QAnon and on the X22 Report and other YouTube channels but I swear, this is what someone I’ve known for 5 years, a retired SpecOps Marine just told me.

Today’s video by Where We Go 1 We Go All gives many details that indicate that this is, indeed The Storm.

via The Storm is upon us: Adrenochrome users among the rich and famous going down | Cairns News